How does the Imbalances feature work? Print

Imbalances is an analysis featured designed to identify potential user imbalances in specific workout/movement categories. Imbalances are automatically updated based on user logged results, and could provide valuable insights into Strength, Mobility, and Technique issues holding an athlete back.

Imbalances is located in the btwb Analyze section. Click into the side drawer menu, then again on the Analyze menu item. Click on Imbalances from the 6 available options.

The main Imbalances screen provides a summary overview of any major or minor imbalances the btwb app has found given a user's current logged results. 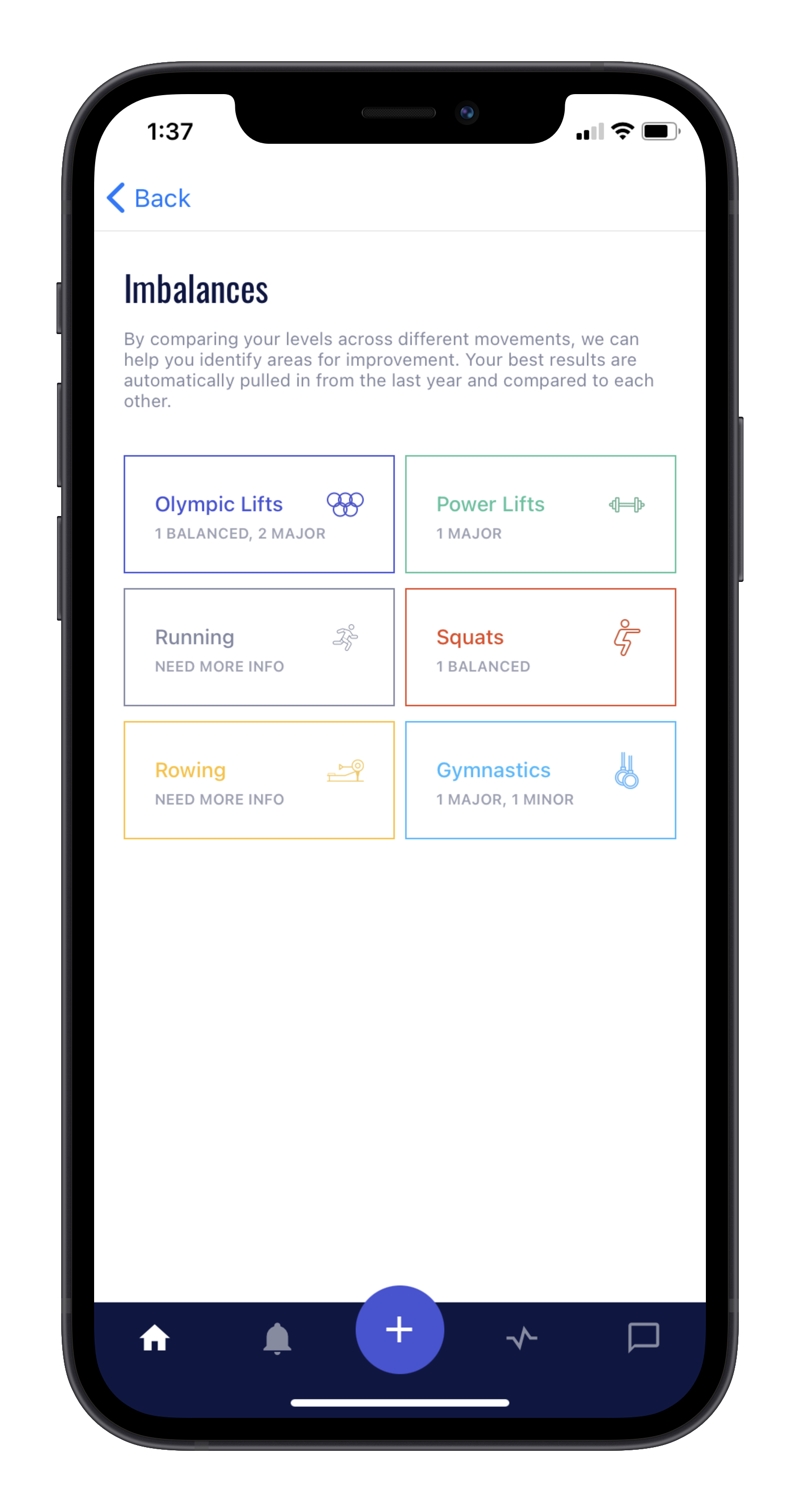 btwb looks at different movements in each of the following categories.

Data is automatically pulled in for each of the categories above from various workout posts (except for Gymnastics, see below). Only the best result for each movement in the last year is used. Imbalances charts will update automatically as better results are logged. As an example, the chart below shows a level 60 clean versus a level 63 jerk. Because those are within 5 levels of each other, they are Balanced. In other words, given the available data, this user's best Clean in the last year is comparable to their best Jerk. Levels are calculated by comparing performances to other users' performances for the same movement. 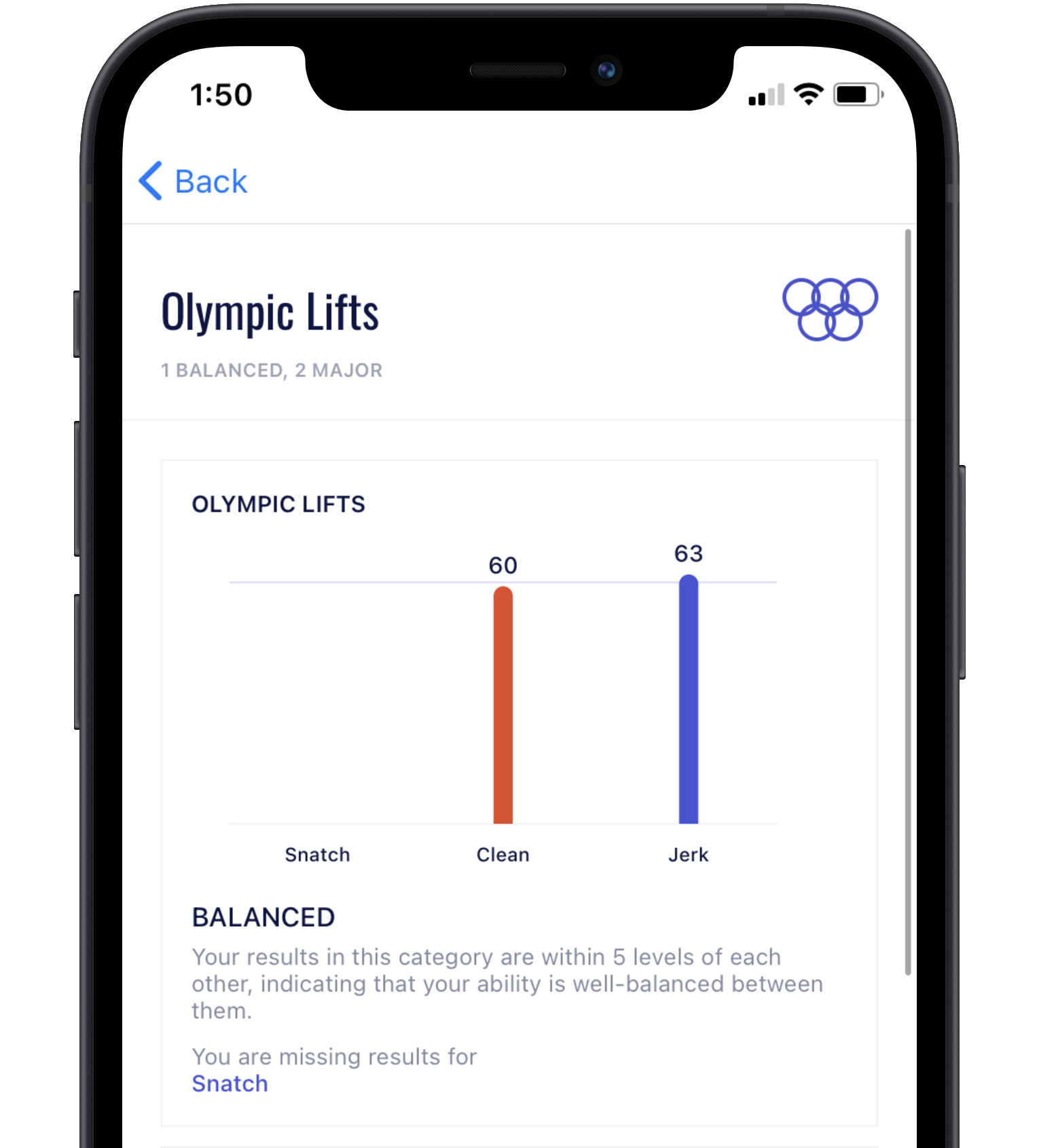 The chart below shows an example of a Major Imbalance. Because the Front Squat level is more than 10 levels less than the Clean level, this indicates a potential strength issue. 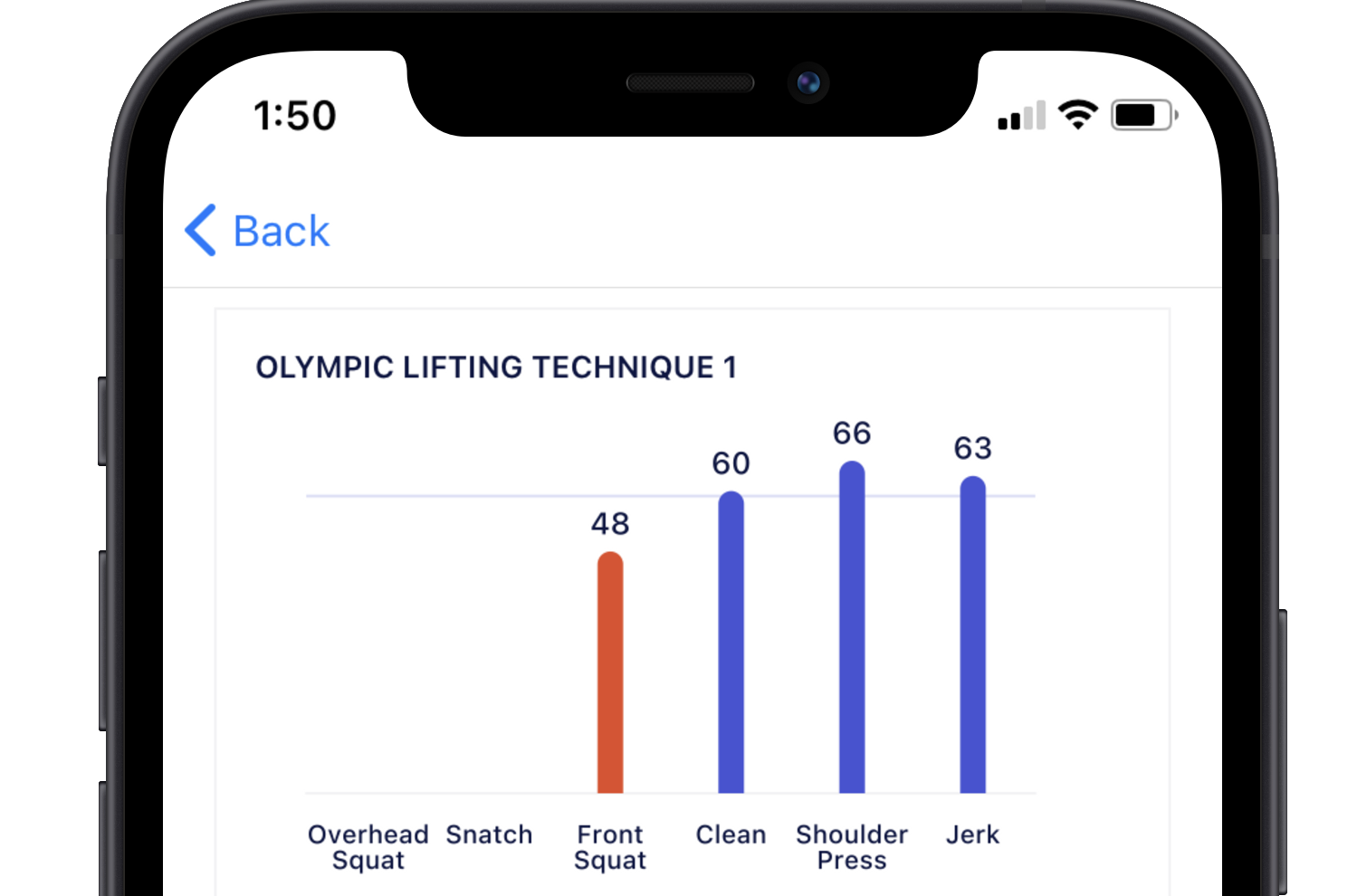 If you are missing data, it's because you don't have valid results within the last year for that movement. The next best performance will always be used if your best result expires AND it's still within its 1 year window. Missing data is represented by empty bar charts. Use the "Your are missing results for" section to quickly log a new result for that movement.

This is the only category that will NOT automatically update based on logged workout results. Because we want to capture "unbroken" efforts for each of the gymnastics movements, btwb will only pull from the specific max workout version for the movement. For example, you'll need to log scores for each of the workouts below to start filling up your gymnastics Imbalances charts.

Imbalances is known as "Weaknesses" on the btwb website. The Weaknesses status bar can be found on the Whiteboard screen and is a bird’s eye view into a deeper analysis of the Strength, Mobility, and Technique issues an athlete might be facing. In each weakness area, we compare your levels on certain lifts and movements. Large discrepancies in levels indicate possible weaknesses. 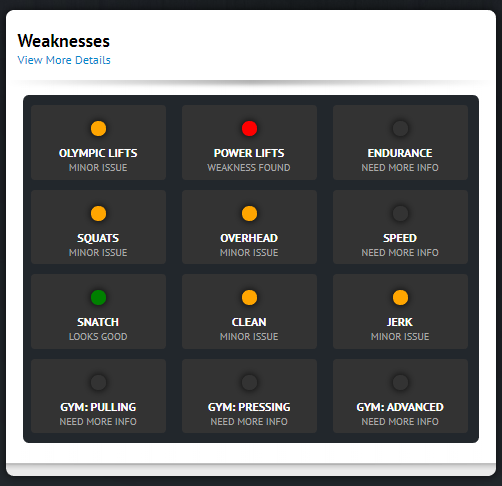 Green dots indicate that there isn’t a large discrepancy in levels for that particular weakness area.

Orange dots indicate a spread of 5-10 between the highest and lowest levels in that area.

Red dots indicate a spread of 10+ between the highest and lowest levels in that area.

Gray dots indicate that we don’t have enough results from the last 6 months in that area. 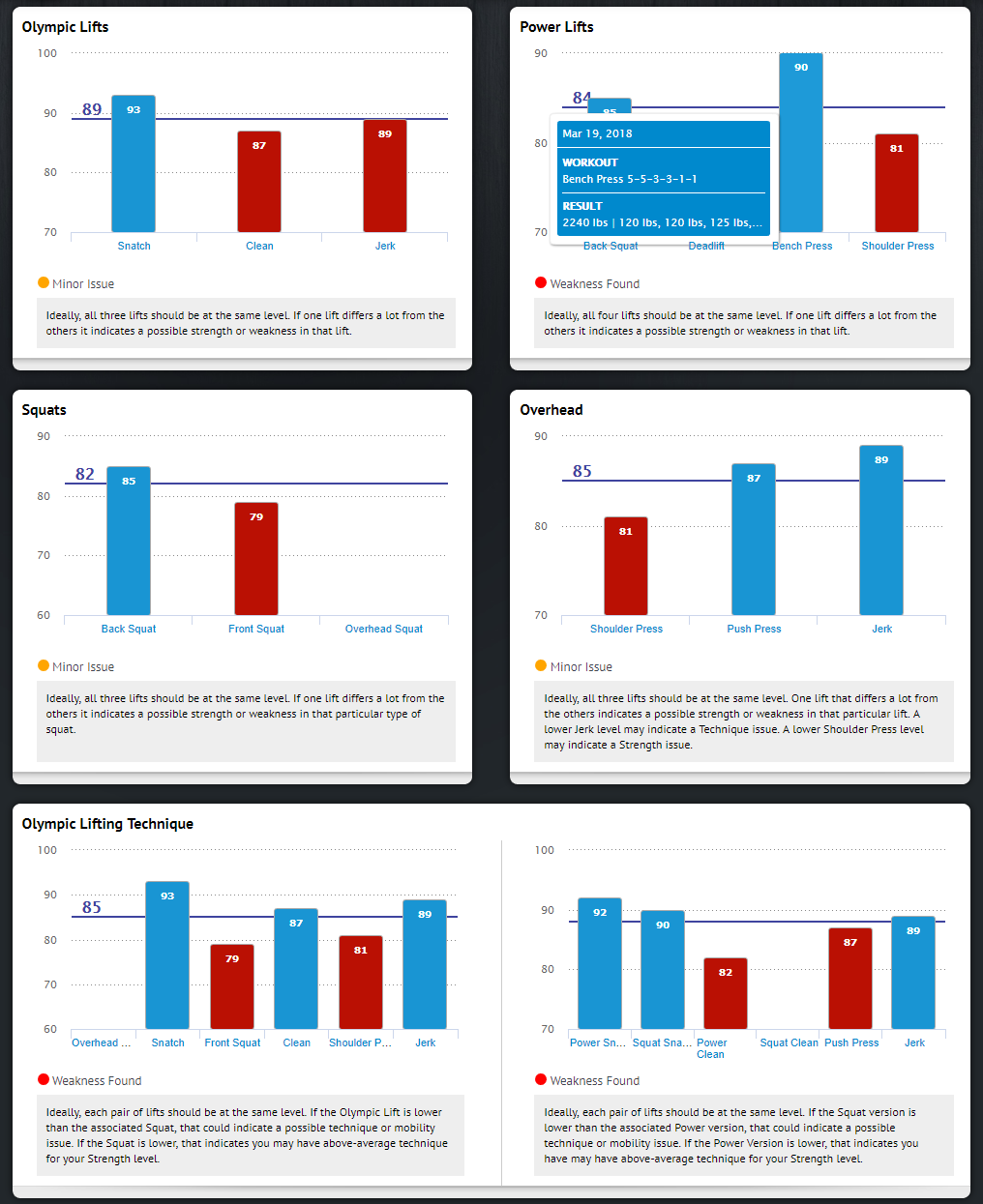 Clicking “View More Details” will take you to the “Analyze > Weaknesses” section, where you will be given 12 different graphs that will help you identify different types of weaknesses. Above is an example of one of these graphs. Each graph uses your individual levels in each of the lifts/movements to compare your proficiency and highlight discrepancies in lifts/movements. In this particular graph, we compare your level for Shoulder Press, Push Press, and Jerk. If all of your levels for these three lifts were the same, that would indicate that you are balanced between the three lifts compared to the rest of the community. In this example, we have the chart from a member of CrossFit South Brooklyn (Toni Smith.). As you can see, in her Overhead category, her dynamic and technical, level is a lot higher than her shoulder Press. This indicates that her strict strength is not as developed, compared to other CrossFitters. So we might recommend that Toni focus more time to developing her strict overhead pressing strength, to help bring that level in line with her other overhead lifts.